For months leading up to 9-11 I attended one funeral each month. There was the girl from my small high school (car accident), the friend I watched fight cancer all through high school and while I started college, the middle school student hit on a scooter, and church leaders. There were also medical scares with other church leaders that hung heavy. I clearly remember being up for an early class and getting a call from my dad to inform me about the most recent unexpected death; I went back to bed instead of going to class. On September 11th, I was driving because I was late for that same class and caught the first news reports about a plane flying into the twin towers as I was parking. Like most people I have some clear memories about how that day was different from every other. Unlike most people, I wasn’t scared. I wasn’t shaken. I didn’t watch the news for hours. I didn’t feel much. I was dissociated. I was disconnected from emotions because I had reached my threshold of grief and stress.

9-11 by itself was enough to overwhelm many people’s capacity for grief and stress and fear. My heart disconnected from the world around me to protect me from that trauma because I no longer had the resources to process it. Many others experienced trauma reactions as their hearts and brains tried to process something overwhelming. Dissociation is protective.

As we headed into March of 2020 things were looking promising for me. I was simplifying and downsizing. We were looking forward to semifinals for volleyball and starting rugby practice in April. I have friends in Australia, so we had paid attention to the wildfires. We have family in Samoa and had worried about their measles epidemic. Kobe Bryant was shocking and reminded us how nothing is guaranteed. Then COVID-19 shut down everything in what seemed like just a few hours. I had a fever, briefly. Elearning. Murder hornets. Members of my church family became ill with COVID and were hospitalized. A former colleague still struggles to recover. I have family members who have a compromised immune system, but social media complained about wearing masks. We pivoted. I have the privilege to be able to work from home. Elearning was unpleasant for everyone, but we could stay in and sanitize and stay safe from the virus.

Ahmed Arbery’s murder was terrifying as my dark skinned son wanted to cruise his bike around our new suburban neighborhood. Social media was covered with his photo. A group texted alerted me that a Black man had been shot by police right outside of my friend’s neighborhood. Indianapolis Metro Police also shot another Black man and ran over a pregnant woman that same night, although they haven’t gotten as much attention. I was already lamenting and concerned about my son’s safety when George Floyd was heartlessly tortured to death in broad daylight, while four men waited for him to die, apathetic to cameras and the cries of witnesses. Those photos on social media disgusted me and made my blood run cold, but I struggled to stop scrolling. Protests against police brutality were met by more excessive force and brutality by police. My friends were sprayed with pepper spray, shot with tear gas, targeted by concussion grenades, and shot in the face with rubber bullets. There were riots. Lynchings. While more people began speaking up and unlearning, social media became more polarized than ever – or maybe I was just too compelled to keep scrolling.

Then suddenly a young family friend died just a few days after the birth of her first child. Just a few hours before her death, I had loved a photo she shared on social media of her new daughter and she had loved my reaction. In the last ten years her father and brother had both died suddenly. Her grandmother had passed right before COVID. It was too much. It isn’t fair. My heart is broken for her mother, her newborn, and her husband. She was already making an impact on the world through her relationships and work. Her loss is felt be many.

The day she died, I told my dad that it felt like a bad dream; it just couldn’t be real. The sun was shining outside, and it just didn’t fit with reality. The next day, I tried to send a Marco Polo to one of my best friends and couldn’t. I didn’t want to say the words. I didn’t want to open up all the feelings. I had been grieving for three months and this loss was the straw that broke me. I knew I needed to Brainspot myself but I couldn’t bring myself to do it. I avoided certain conversations. I finally recognized the dissociation. I was shunning all the thoughts and feelings because it felt like too much.

Even without this personal tragedy, 2020 has been enough to overwhelm anyone. You are likely finding some dissociation in yourself. Even as I was compelled to keep scrolling social media, it was a form of dissociation. I was staying “informed” and “engaged”, but was I processing my feelings? Making donations and writing letters was my real action; scrolling only helped me hold on to the feelings. Over-focusing on some conversations while ignoring others is a form of dissociation. Getting lost in a book or binging Netflix is another way people dissociate. As the pandemic took hold in America, I listened to a podcast where Dr. Bruce D. Perry (listen to it, he’s one of my favorites) suggested parents help their children to *dose their dissociation, allowing screen time, but in small doses rather than binges. At times we all need a break from certain thoughts or emotions. Get lost in a book, stream Hamilton, go for a walk, play candy crush if that is your thing. Do it purposefully to take the necessary break from what you are feeling or thinking. When I gave in to the compulsion to scroll social media, I wasn’t giving my heart and brain the break it needed from the tragedies; instead I was hyper focused and feeding the overwhelm. Yes, it helped me find small connections that I needed via DMs, but there are more efficient ways to connect. Relational connection is an important part of neurobiological regulation.

Because I did not dose my dissociation well before, dissociation took over when the stress became too much. I am tired. I am fatigued. I am sad. I have used this blog to help me reconnect. When I did talk to my friend (five days later) she responded, “When you said you couldn’t say the words. I totally understand that. There is so much that happens where it’s too much to say the words.” I am pretty lucky to have friends who are also therapists who do their own work. I am thankful for the gift of Brainspotting because I don’t have to say the words. Many of my clients don’t want to say the words. Brainspotting works when you don’t want to talk to a therapist or you just can’t. This weekend I have chosen my dissociation to start working my way back. I need to grieve. I need to lament. I need to lean on my hope. I need to feel my feelings, observe my thoughts, and notice how my body reacts. We will not see an end to COVID-19 or structural racism any time soon. To have the emotional stamina for this marathon, I have to choose my dissociation and dose it rather than binge it. I need sleep and good food (less sugar) and exercise and connection and laughter to hold on to my neurobiological regulation. 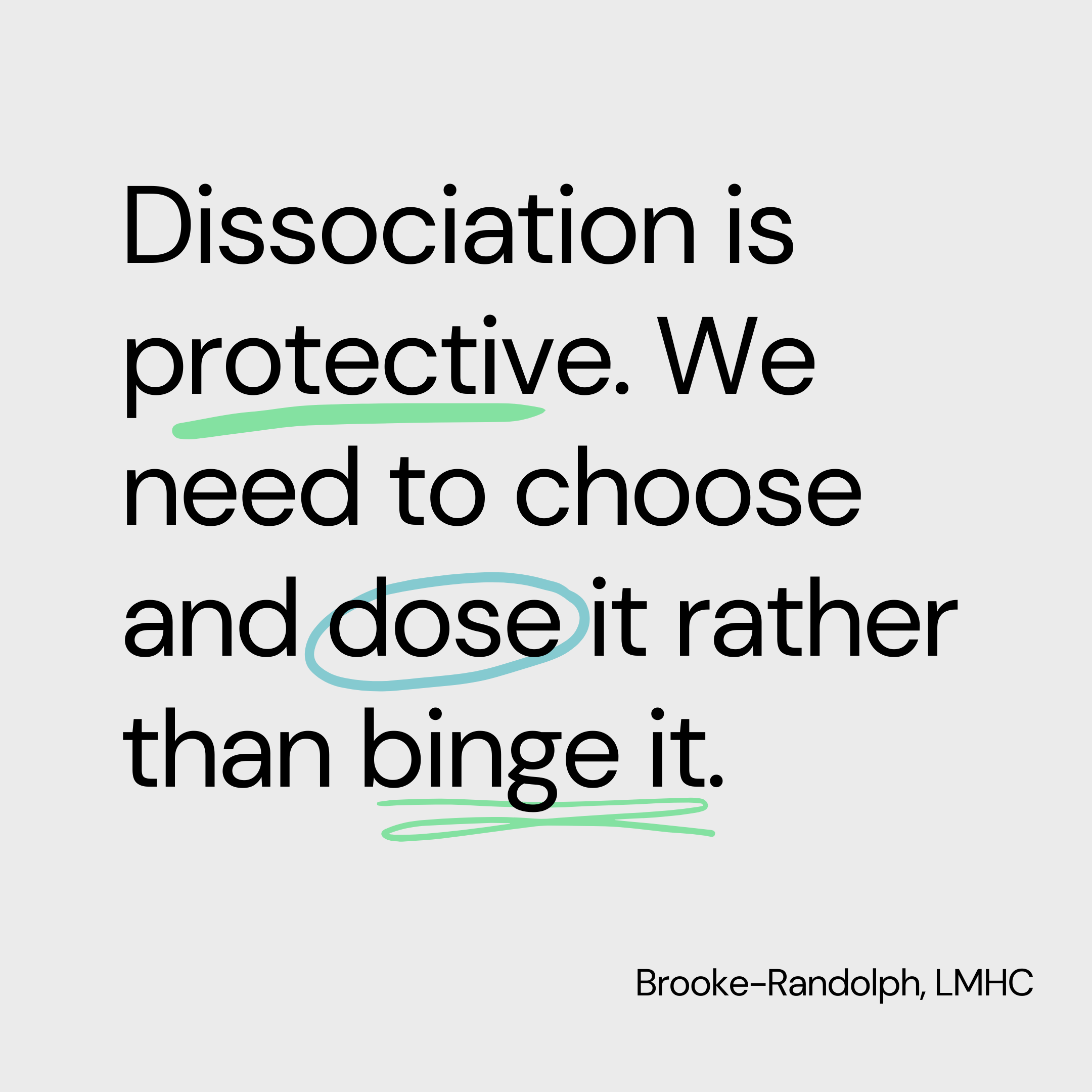